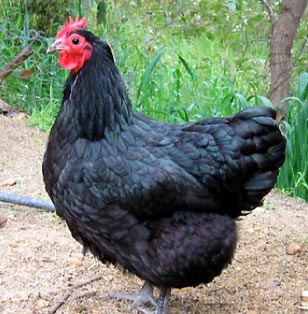 Australorp
Australorps are the Australian take on the Orpington breed. They are calm and friendly, and excellent layers of large, light brown eggs. The Australorp's exceptionally soft, shiny black plumage has hints of green and purple in the sunlight. Peaceful and dignified, Australorps are an absolutely delightful bird which we highly recommend to anyone who wants a pet chicken that lays dependably. 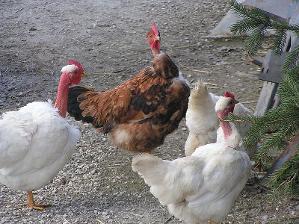 Naked Necks
Who knew turkeys and chickens could interbreed? This bird looks like a turkey due to its "naked neck", but it's all chicken! It was bred this way to be easier for cooks to pluck. Strangely, Turkens are said to fare very well in the cold despite their feather shortcomings and big combs (though these features do help them in the heat). They have an unusual look that some people don't care for, but they are also calm, very friendly and one of the easiest chickens to tame. Relatively rare in North America, Naked Necks are very popular in Europe, especially France and Germany. 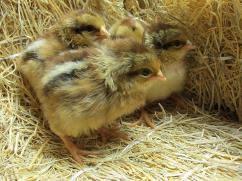 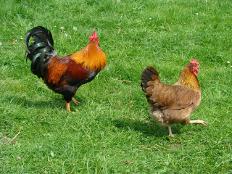 Welsummer
These rare birds of Dutch origins are sought after for their large, deep dark reddish brown eggs. The breed is considered fairly new to North America. It can adapt well to any environment so having a large space is necessary. This breed gets most of its food from foraging and only becomes flighty on rare occasions. They are considered a loose, or soft, feathered breed. The Welsummer breed gained in popularity since the rooster is showcased on the Kelogg's Cornflake cereal box. 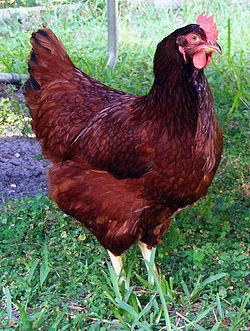 Rhode Island Red
Rhode Island Reds are held in such high esteem that they're the official Rhode Island state bird. They were once hugely popular in America, though they declined right along with the small farmer. Today they're making a comeback due to small flock owners (like us!). They're the do-everything bird: they lay exceptionally well, they're valued for their meat, they're extremely cold hardy, and hardy in general. 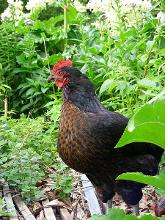 Sex Links
Buff,red, brown, black,"sex link" chickens, meaning they're bred specifically so that males and females are different colors when they hatch. Females are egg-laying machines that continue to lay well in the heat and cold, when many others slow down. 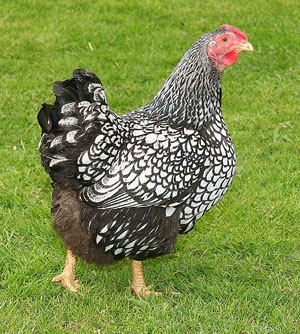 Silver Laced Wyandottes are the original Wyandotte variety, and a wonderful example of American breeding. They are beautiful and productive.

Wyandottes are a favorite amongst backyard flock owners for their dependable egg laying, easy going nature and cold hardiness. Each feather is silvery white edged in beetle black, similar to Silver Sebrights. The hens look as if they're ladies dressed for a fancy ball! The Wyandotte roosters have the same laced feathers, but their hackles and capes are composed of glimmering silver, like a suit of armor. (We think roosters should be named after the Knights of the Round Table!
Wyandottes have a heavy body and small rose comb which makes this breed perfect for cold climates because they are not prone to frostbite. The hens are hardy, energetic and faithful layers. 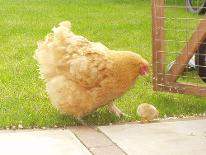 Buff Orpington is bred as a dual-purpose breed (meat production and eggs), but its popularity grew as a show bird rather than a utility breed. Their large size and soft appearance together with their rich color and gentle contours make them very attractive. 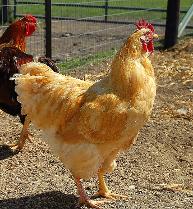 Buff Rocks are truly a gorgeous color, being pure golden buff from feather base to tip. The intense yellow of legs and beaks, the bright red of comb and wattles along with the golden plumage make these a real delight to the eye. Our strain has the same deep, well set bodies as the other Rocks, possibly a little smaller in size. They are fine winter layers of brown eggs; also good setters in late spring. Baby chicks are a soft buff color right from the start. 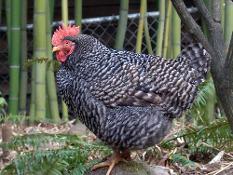 The Barred Rock is one of the all time popular favorites in this country. Developed in New England in the early 1800's by crossing Dominiques and Black Javas, it has spread to every part of the U.S. and is an ideal American chicken. Prolific layers of brown eggs, the hens are not discouraged by cold weather. Their solid plumpness and yellow skin make a beautiful heavy roasting fowl. Our strain has the narrow, clean barring so desirable in appearance. Their bodies are long, broad, and deep with bred-in strength and vitality. These chickens are often called Plymouth Rocks, but this title correctly belongs to the entire breed, not just the Barred variety. Whatever you call them, you can't beat them for steady, reliable chickens. Baby chicks are dark gray to black with some white patches on head and body. 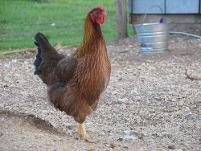 Single Comb Brown Leghorns, which lay white eggs, are the second best known variety of Leghorns. They originated in Italy, and are the most colorful of all breeds. Males have black tails, orange-red heads, lustrous deep orange back, and saddle feathers. The female's head is lustrous deep orange, and the front of the neck and breast are a rich salmon color. The remainder of the body is a combination of black and brown shades.
Standard weights at maturity are males-6 lbs. and hens-4 1/2 lbs. 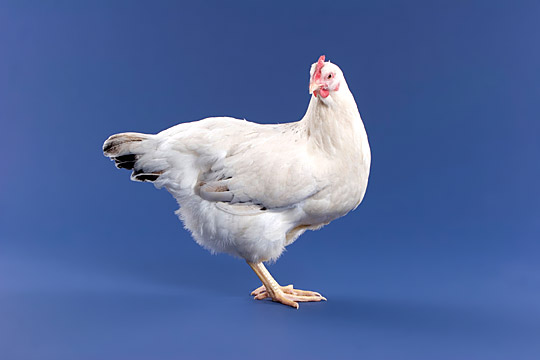 The Delaware is a relatively new breed of chicken, having only been developed in 1940. They're a cross between New Hampshire Reds and Barred Plymouth Rocks with the goal of maintaining the prolific egg production of these two breeds but increased meat value. They're a lovely, calm white breed with black feathers around the neck and the tip of the tail, and with some black striations also working their way into the back.
Their plumage is the beautiful, attractive black and white Columbian color pattern. They have the same general shape as New Hampshire Reds, which is much shorter and more compact as compared with Plymouth Rocks. They are an excellent dual-purpose breed that efficiently produces large brown eggs.Standard weights at maturity are males-8 1/2 lbs. and hens-6 1/2 lbs. 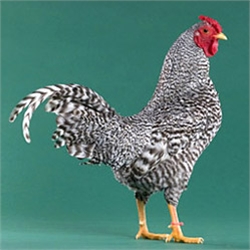 Dominiques are considered a "heritage" breed of chicken in that they've been around for hundreds of years and are now critically endangered. Some people can't tell the difference between a Dominique and a Barred Rock, but the trained eye will notice that Dominiques have a rose comb versus the Barred Rock's single comb. Dominiques are a wonderfully cold-hardy dual-purpose bird, and hens make very caring, nurturing mothers. 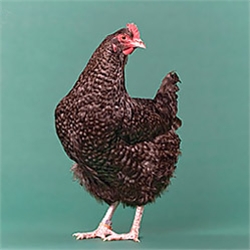 Silver Cuckoo Marans, also known simply as "Cuckoo Marans" are considered "chocolate eggers", meaning their eggs can range from medium brown to a deep chocolate brown - cool! No wonder they're so popular. If you value a colorful egg basket, Marans are a "must. 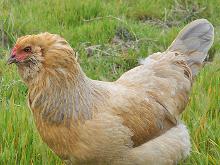 The "Easter Egg Chicken", This unusual breed gets its name from the Indian tribe of Chile where they were first discovered. These natural Easter Eggs will amaze your friends and make a great "show and tell" project for school. Adults are of medium size with pea combs and our breeding stock is selected for their ability to produce colored eggs. They exhibit a wonderful combination of colors and color patterns and 10 or 20 of these birds make an absolutely beautiful laying flock that is extremely hardy and will be the talk of the town. Baby chicks come in all colors, plain and fancy, just like the adults. This is a unique breed and great fun to have when the colored eggs start coming. 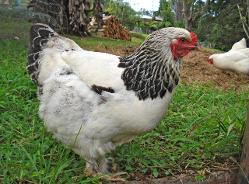 Light Brahmas are calm, friendly birds that make good pets or exhibition fowl. Males are calm and generally not aggressive towards humans. They are not skittish or easily scared, making them a popular choice for families with children. Due to their docile demeanor, Brahmas can be easily trained so that they can be handled by almost anyone. The hens are good layers of brown eggs, especially in winter, and will also set. 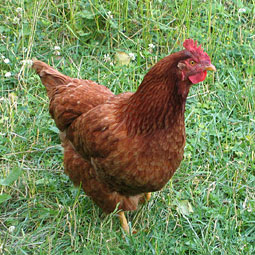 New Hampshire Reds are derived directly from Rhode Island Reds, and over the years they've changed so much from selective breeding that they've come to be recognized as a new breed. The New Hampshire Red differs from the Rhode Island in that it produces more meat (and therefore fewer eggs), it's faster to grow and feather out, it matures early and it's even more vigorous. 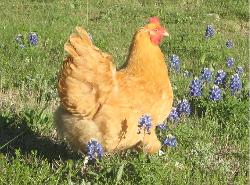 Buff Rocks are truly a gorgeous color, being pure golden buff from feather base to tip. The intense yellow of legs and beaks, the bright red of comb and wattles along with the golden plumage make these a real delight to the eye. This strain has the same deep, well set bodies as the other Rocks, possibly a little smaller in size. They are fine winter layers of brown eggs; also good setters in late spring. Baby chicks are a soft buff color right from the start. 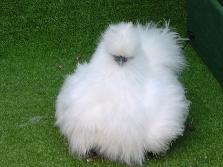 The flower garden of the poultry world, are miniature chickens, usually one-fourth to one-fifth the size of standard varieties 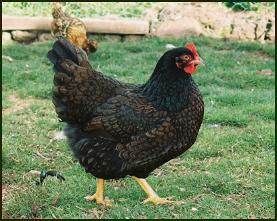 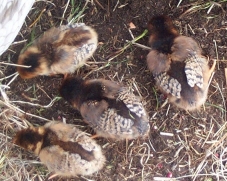 The Barnevelder originates from the Barneveld region of Holland and is so well-known that, according to the Barnevelder Club of North America, the Barnevelder name is synonymous with the word chicken. It is sought after for its dark "chocolate" brown eggs. This beautiful bird is hardy and quiet and doesn't mind being confined. 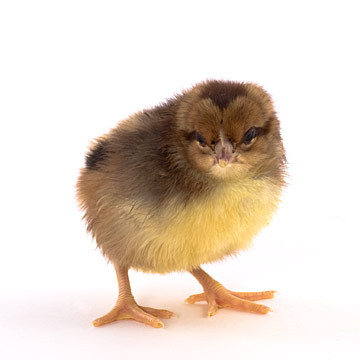 The Sussex have everything: they are great layers of tinted or light brown eggs--and they lay right through the coldest weather. They are dual purpose birds, though fat-bodied and not prone to flying when mature, so they are easily fenced. In England, they used to be THE standard table bird, before the modern Cornish Crosses came along.

They forage well and are economical eaters that are friendly and easily handled. Their curious nature means they will often follow you around the yard if they think they can beg a treat from you. The "speckled" variety offered here has plumage that gives them some camouflage from predators, too. Many tend to get more speckles after each successive molt, so they just get prettier with age. Seriously, what more could you ask for in a chicken?